Corrosion behaviour of Mg-alloy WE43 processed by PBF-LB 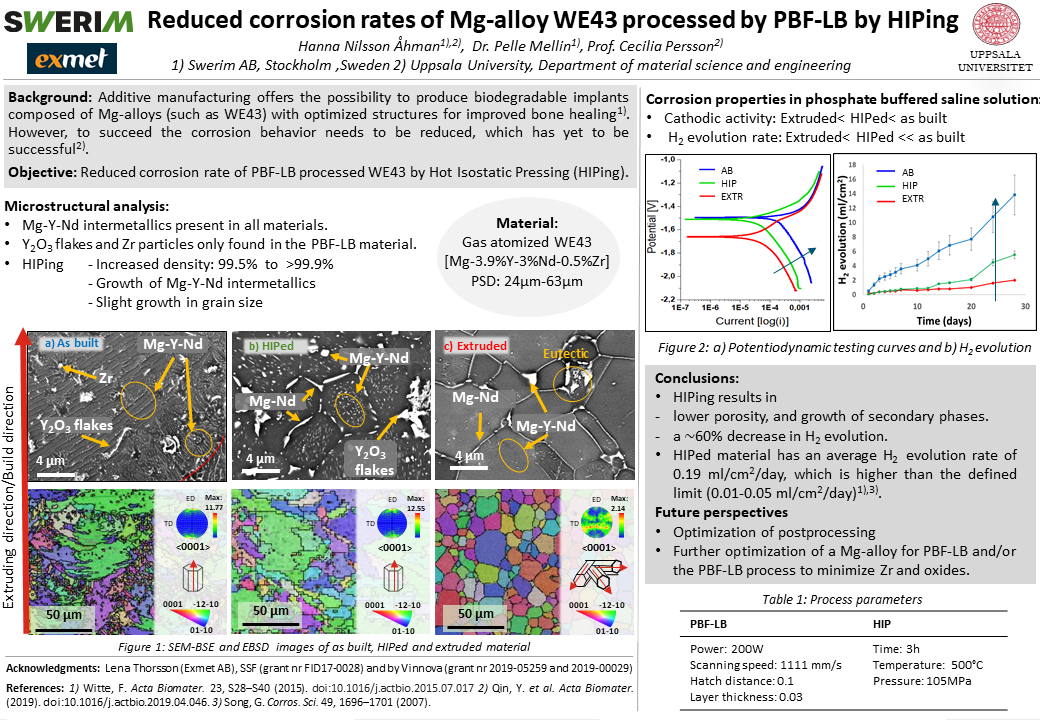 Additive manufacturing has proved to be a useful tool in the production of orthopaedic implants, with optimized structures for tailored biological and mechanical properties. Mg-alloys, in particular, have gained considerable attention in the field, due to their biocompatibility and biodegradability. A major limitation with many Mg-alloys is their excessive corrosion rate. However, improved material properties through alloy and process development allowed for the first Mg-alloy implant to be launched in 2013, consisting in a bone fixation device produced from an extruded Mg-alloy WE43 (Mg-4%Y-3%RE (rare earth metals)).
The number of studies investigating the corrosion properties of Mg-alloy WE43 processed by Powder Bed Fusion- Laser Beam (PBF-LB) remains limited. Thus, to gain a greater understanding of the relationship between the process parameters, microstructure and material properties, the aim of this study was to investigate the microstructure of a WE43-alloy processed by PBF-LB and subsequently Hot Isostatically Pressed (HIPed), and relate it to corrosion properties. The results were compared with an extruded WE43-alloy.
The as-built material had a density of >99%, and a fully dense material (>99.9%) was obtained after HIPing. The individual melt pools were clearly visible in the as-printed material, a structure that was partially conserved after HIPing. Secondary phases included
Mg-RE intermetallics and oxides. The size and distribution of the intermetallics changed notably after HIPing, while the oxides remained largely unchanged. Furthermore, the corrosion resistance was slightly improved after HIPing, but remained lower than the reference. This is due to the distribution of REs and oxides. The distribution of REs is known to affect corrosion behaviour by influencing electrochemical properties of the phases. The effect of the oxides have not previously been established, but their high volta potential suggest they have a detrimental effect on corrosion behaviour.

Future studies should include further alloy- and processdevelopment to improve corrosion behaviour.